So, so close. But not nearly enough. Although Valencia ended a horrid run of three consecutive losses, our hapless away form continues. Even the Europa League seems like a distant dream now.

After yet another moment of individual brilliance from Goncalo Guedes, Los Che looked set to finally register an away win in the league this year. But once again, an inability to close out games proved to be our undoing with another late goal.

In all honesty, the result flattered Valencia. For most parts of the game, Granada were far superior, their energy and desire in stark contrast to the visitors’ listlessness and lack of ideas in front of goal. If not for former Valencia frontman Roberto Soldado’s criminal profligacy, the Bats could have been in for a thrashing.

Indeed, our first goal was our first shot on goal, courtesy of Manuel Vallejo. It came two minutes after Carlos Fernandez’s penalty had put Granada in front, no thanks to Francis Coquelin’s clumsy challenge of Fernandez in the box.

After Vallejo’s equaliser, Voro brought on his big guns in Maxi Gomez and Guedes. And it was the latter who vindicated his substitution after unleashing an absolute thunderbolt from outside the area. It was yet another goal of the season contender from the Portuguese, after his wonder goal against Osasuna two weeks ago. These were the only five minutes that we showed up for.

Soon, we reverted back to type by conceding the silliest of goals. What was Ruben Sobrino thinking as he detached himself from the four-man wall, allowing a gap for a Fede Vico’s free kick to squirm through the gap and past a helpless Jasper Cillessen? The look on Dani Parejo’s face said it all following his substitution just a minute later, taking his anger out on a water bottle by booting it into the stands.

In his pre match press conference before the match, Voro had said his team looked ready to fight to the end. Yes, the team did fight – but not until the end. In this form and with this mindset, qualifying for the Europa League looks unlikely. 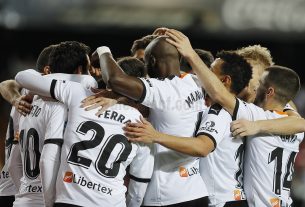 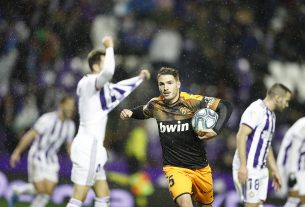