Tumultuous times threaten Valencia Football Club. In the last few months, there has been no shortage of drama for the Bats. The club seems lost, struggling to stay afloat.

Most recently, Valencia’s former President, Anil Murthy, left after a slew of leaked audios hit the news. Another major shakeup was at the managerial level, where unhappy boss Jose Bordalas departed after just one season.

All these events are coupled with poor performance on the pitch – Los Che managed only a 10th place finish in the LaLiga this season. No wonder the fans are restless.

Valencianistas across the world have grown hostile, with the most apparent show of disdain occurring outside Mestalla on the final LaLiga matchday.

With such a gloomy backdrop, the summer feels far from sunshine and happiness. What is the way forward next season? Should fans support the club with greater zeal during such troubling times?

Take a look at Everton Football Club. Founded in 1878, the club goes a long way back and has garnered an immense following over the years.

However, in recent times, they have been a far cry from their former glory days. Wallowing in 17th and fighting relegation, Evertonians were disgruntled with the club owners, and one would expect them to begin boycotting the club.

On the contrary, fans of the Toffees banded together before their penultimate Premier League game against Crystal Palace and marched down towards Goodison Park. Shrouded in blue flare smoke, the team coach rolled into the stadium as incessant cheers and chants filled the air.

The atmosphere was extraordinary, and all you could see was blue. Everton went on to come back from 0-2 down to clinch a 3-2 victory, and safety in the English top flight.

Would they have achieved this impressive feat if not for the pre-game fanfare? Maybe. But they certainly would have had a much harder time if they arrived at the stadium greeted with boisterous boos and pernicious protests.

On the other end of the spectrum lies Manchester United. Similar to Everton, and Valencia, the once exalted club has fallen far from grace, and the fans are not happy.

League titles are a thing of the past as a battle for a Europa League spot has become the norm. Understandably, fans have grown discontented with club owners, the Glazer family.

Most recently, the fans planned to remain outside of Old Trafford till the 17th minute of their game against Norwich City on 16 April, one minute for every year the Glazers have been in charge. United went on to narrowly edge Norwich out 3-2.

Despite the win, United are in a pitiful state. The rot is deep at Old Trafford, with “Glazers Out” banners a mainstay during home games and vocal fans voicing their frustration all over social media.

The club’s decline has only worsened with time as fan unrest continues to fester. This would explain the lacklustre expressions plastered on most Manchester United players, as well as their lackadaisical performance on the pitch.

Ironic for a club named United.

ONE CHANGE TO FIX IT ALL

From owner to player to fan, change will take the whole fellowship.

With a new manager and a new season ahead, Valencia fans have the opportunity for a fresh start. But, will the fans take on a new stance too, or will their negativity continue to bog down the Bats?

In such stormy seas, it is the fans that need to buckle down and anchor Valencia with their steadfast support. Turn your jeers into cheers and protest into praise that will propel the club forward into better days.

Unity underpins the club’s success, as Valencia’s newly-appointed General Director, Sean Bai put it: “We are a family: The club, the coach and his staff, the fans…all united and strong with the same desire: to make a great Valencia CF.”

• Matthew Gan is a football fa-“SUUUUUUUUIIIIIIIIII!”

• The views expressed in this article are the writer’s own and do not represent Batzine’s. 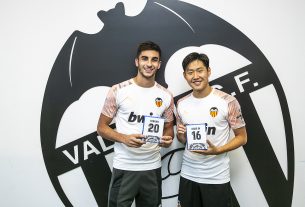