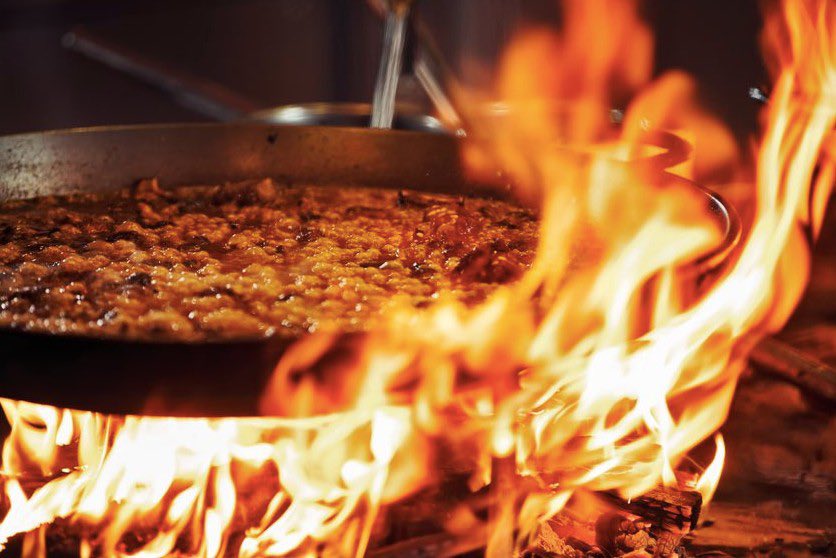 More paella facts, you ask? Behind every food lies a world of information and Valencia’s creation is no exception. But what makes this dish so unique, even among its contemporaries? Here are 2 more Paella facts to whet your appetite.

If you’ve never tasted toasted rice, be prepared to never forget it after having paella. Cooking the dish over a burner or an open fire creates a layer of toasted (but not burnt) rice called “socarrat” at the bottom of the pan.

Enjoyed by many, the crunchy socarrat is considered to be an important part of Paella. Such is its allure that 3 Michelin-star chef Quique Dacosta has gone a step further. He has invented a high-end crepe-like dish from socarrat for people to enjoy what is now a delicacy, without the rest of the Paella.

You may be conscious of eating etiquette – no elbows on the table, chew with your mouth close and so on. But there’s actually a certain etiquette specific to eating paella.

If you walk around the streets of Valencia at night expecting a piping hot pan of paella, you’ll be disappointed to know that most don’t serve this for dinner. It’s traditionally a lunch dish.

Typically, the paella dish is placed in the middle of the table so that everyone has access to it easily. And in Valencia, it’s not uncommon for people to just dig in with their spoons instead of scooping out their portions. That’s what makes it so special!

By now, you’re either hungry or you’re lying!